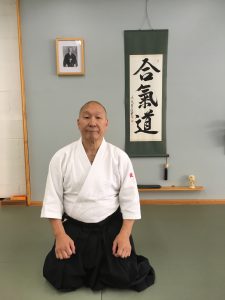 Andrew Sato Sensei began his Aikido training in December, 1977, after a trip to Japan added fuel to a fire that was already burning in him to connect with his ancestral roots. After a free trial lesson with Fumio Toyoda Shihan, Sato Sensei was hooked.

At the time Sato Sensei began training, Toyoda Sensei’s dojo was a member of Ki Society. Recounting old stories from his early days, Sato Sensei reminisces fondly of training with the uchideshi (live-in students at the dojo) that came from Japan to study under Toyoda Sensei. At the time of Fumio Toyoda’s passing in 2001, Sato Sensei was asked to take over the role of Chief Instructor for Aikido Association of America (AAA). He quit his full-time job with a Japanese company and devoted his life completely to spreading Aikido.

At the end of 2004, Sato Sensei parted ways with AAA. At that time he planned to simply live the life of a student and continue to train, but at the insistence and pleading of many students and dojos, Sato Sensei agreed to take the lead on creating an organization of his own. The Aikido World Alliance was born in 2005!

Sato Sensei’s continued efforts have resulted in the AWA being directly affiliated with Aikido World Headquarters Aikikai Hombu Dojo in 2014, and in 2016 Sato Sensei was promoted to Nanadan (7th degree black belt) and became the only Aikido instructor in the Chicago area to be awarded the status of Shihan, or Master Teacher, from Hombu Dojo.

Sato Sensei makes regular trips to Japan to train at Aikido World Headquarters Hombu Dojo. Sato Sensei spends most weekends on the road conducting seminars throughout the United States and Europe sharing his love and passion for Aikido with the members of the Aikido World Alliance. 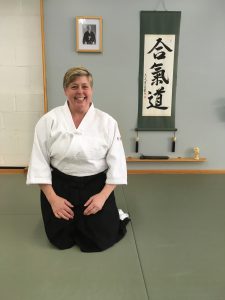 Laura DeGraff Sensei started training in 1998 at Tenshinkan Dojo, the headquarter dojo for Fumio Toyoda’s Aikido Association of America (AAA).  In 2004, she left AAA to follow Andrew Sato Sensei and was one of the founding members of the Aikido World Alliance (AWA).  Since that time, she has continued to train regularly as well as teach classes at Kiku Matsu Dojo and conduct seminars at various AWA dojo.

In addition to being the Dojo-cho (manager) of Kiku Matsu, DeGraff Sensei is also a member of the AWA Technical Committee and the Director of Operations for the AWA.

Laura’s focus for her class instruction is making Aikido accessible, safe and fun.  Aikido is a living art and Laura continues to develop her art as both a lifelong student and a dedicated instructor. 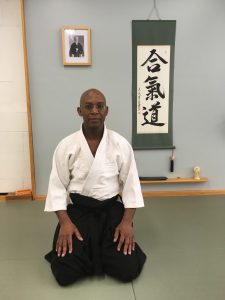 Dr. Joel Augustin started training in Aikido in 1992 with Fumio Toyoda Shihan at Tenshinkan Dojo. In 2005, he followed, Andrew Sato Sensei, and became one of the founding members of Aikido World Alliance.

Although Aikido is a peaceful art, he likes to explore its martial aspects as well.
Joel is also a serious practitioner of Taichi and Bagua. 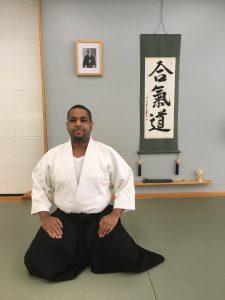 Orpheus Hawkins began his training in 1981 at the age of six under his father, the late Garrett Hawkins, a student of Fumio Toyoda Sensei. After his father’s passing, he explored other martial arts as well as training under other Aikido instructors.

In 2010, Orpheus began training under Andrew Sato Sensei. He seeks to perfect tai sabaki (initial body motion), maintain a relationship between Aikido weapons and open hand techniques, and learn the subtleties of the Art.

Aikido is a dynamic art and Orpheus is amazed how it has evolved within him from childhood to adulthood. 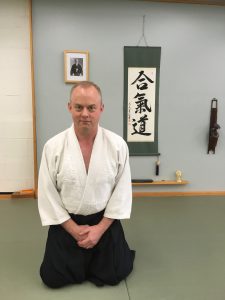 Rob Linxweiler started Aikido in the late 1980s in Chicago under Fumio Toyoda Shihan.  After many years off the mat, he joined Kiku Matsu in the summer of 2013.

Rob is fascinated that Aikido rewards both intense physicality and intellectual scrutiny, and enjoys working with students to understand their perspective on their practice.

Rob has lived in Chicago for over 35 years, and is smitten with its cultural diversity.  He strives to reflect the peaceful values of Aikido in his daily life. 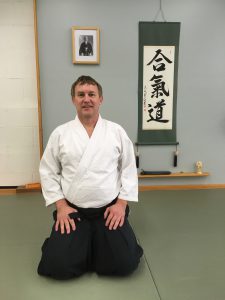 Anthony started Aikido in 2001 under Tetsuo Matsuda.  In September of 2011, he joined Kiku Matsu dojo on Matsuda Sensei’s recommendation.

Anthony likes the wide variety of energy that comes from working with different people on the mat.  In teaching, he tries to simplify technique and show how one technique can flow into others.

Outside of Aikido he works for an engineering company. 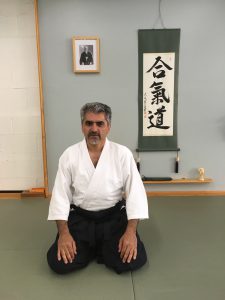 George Minasov’s two boys started Aikido under Sato Sensei in September of 2003. Since then George has been involved in many events related to Aikido. He joined Kiku Matsu dojo in 2010 when he began his mid-life crisis.

Kiku Matsu Dojo became his home and the dojo members became his Family. He likes spiritual and philosophical application of Aikido principals in everyday situations. 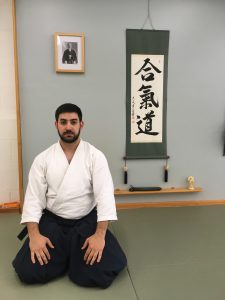 Ryan joined Kiku Matsu dojo in 2014 with the intention of finding an activity to keep himself healthy and learn a useful skill at the same time.

Ryan enjoys the challenging nature of learning Aikido and using it as a tool for self-reflection. In teaching, Ryan likes to explore the patterns we find in our practice and efficacy in training. 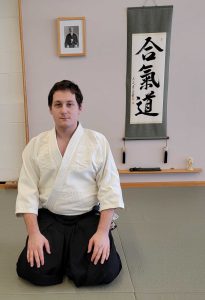 Andrew started Aikido in college the AWA dojo at UNCW.  He served as uchideshi (live in student) from 2018-2020 at Kiku Matsu.  After a year back in North Carolina he rejoined Kiku Matsu dojo in 2021 after moving to Chicago. 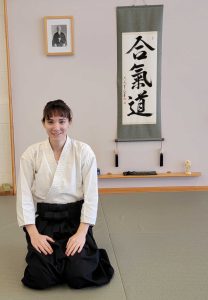 Colby started Aikido in college the AWA dojo at UNCW.  She joined Kiku Matsu dojo in 2021 after moving to Chicago.

Come to our Free Class and try Aikido

On March 11, 2020 from 6:00pm to 7:00pm we will be offering a Free adult Aikido class at Kiku Matsu Dojo.  Come and see what Aikido is all about.  The class will involve stretching, practice of basic movements, an introduction to rolling and falling, followed by some Aikido technique.  Please wear comfortable clothing (workout clothes).

On January 11, 2020 from 12:30pm to 1:30pm we will be having an Open House at Kiku Matsu Dojo.  Come and see what our Aikido, Karate and Meditation programs are all about.  The open house will consist of a demonstration with commentary, a chance for attendees to participate, and a question and answer session.  Refreshments will be served.